Today I’d like to focus on the educational programming offered by Netflix. Homeschooling with Netflix is a great option on those days where you are under the weather, or one of the children is under the weather. Netflix allows you to put on some educational TV and create a lesson with minimal effort.  Here is a list I have compiled of educational programs from Netflix that you can refer to as needed for your homeschooling needs. I  have also compiled a Homeschooling with Netflix Printable. 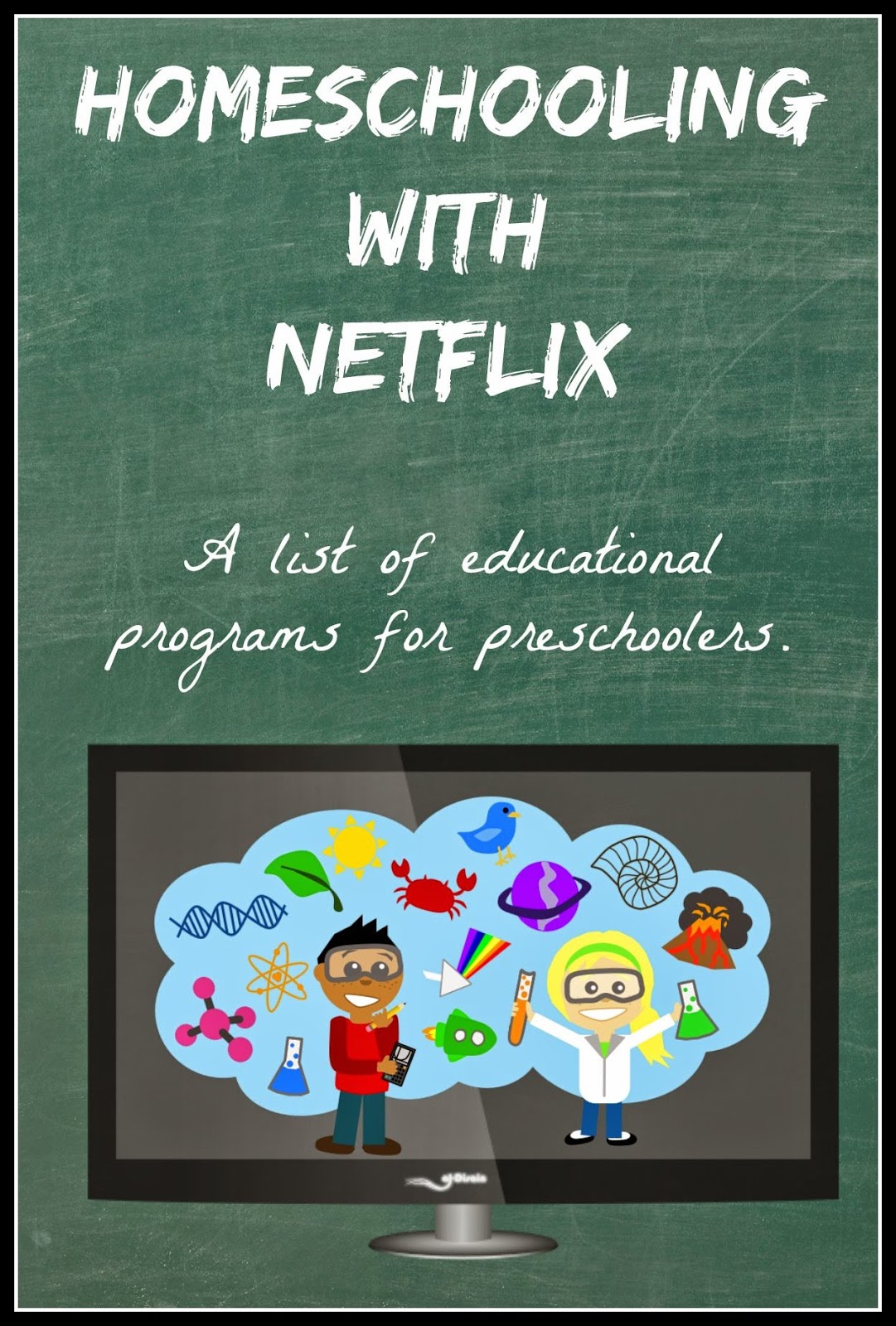 A kid-friendly documentary formatted as told from the animal’s perspective. These episodes include two animals and are short enough to hold a preschooler’s attention span.

A PBS series about animals created by the Kratt Brothers. This series combines both an action plot to keep your preschooler entertained as well as providing facts about a specific animal.

A series that focuses on educating preschoolers about oceanic animals. Each episode centers on a rescue mission for a specific animal.
Peep and the Big Wide World
A series that offers basic science lessons to preschoolers. Peep is a baby chick who discovers useful facts he shares with viewers.
Sid the Science Kid
Sid is a preschooler who questions everything around him with the help of the adults in his life he seeks the answers and is educated on various topics.

This series uses animated characters combined with live footage to engage preschoolers in the world of various wild animals.

A story about Buddy the T-Rex and his adoptive family who learn about the dinosaurs that live around them by riding a time travel train.

A classic series about a teacher who takes her students on outrageous field trips to unbelievable locations like the inside of a pie or the human body.
Math
Peg + Cat
Peg and Cat are a pair who happen upon all these crazy problems which they solve with their math and sense of imagination.
LeapFrog Series
There are several episodes that deal with math, phonics, opposites, and more. The series has all the LeapFrog characters like Scout, Violet, and Tad.
Monster Math
The Monsters in this series are called upon by the local community to solve various problems using their math skills.

Numbers Around the Globe

This series is best for younger preschoolers or tots, it focuses on number recognition taught by baby animals.

Signing Time
A series that introduces preschoolers to American Sign Language. This series teaches kids to use animation and live acting.
Super Why
Wyatt and the Super Readers solve all kinds of problems by reading classic literature. It introduces both familiar stories and the fundamentals of spelling.
Martha Speaks
Martha is a dog who gains the power to talk after consuming some alphabet soup.This series introduces vocabulary words pertaining to the episode at hand.

Find out more about me... All content may contain affiliate links. These are links are nifty because they allow me to earn money for all of the time I put into my website. If you click and decide you'd like to make a purchase, I get a commission. I do my best to make sure that each link is something that provides value and that I personally use or have knowledge of. This policy is valid from 06 May 2015.
© Copyright At Home With Holly 2021